Retrenching Against the Creep of “Social Media”

I’m a terrible procrastinator – I use (abuse?) any possible excuse I can in order to justify dodging meaningful, productive work. Unless I’m really in “the zone”, I struggle to sit down for a handful of hours to focus on “Getting Things Done” – David Allen would despair. Social Media (predominantly Facebook, Twitter and YouTube in my case) has delivered the pinnacle of “justifiable” time-wasting diversions that I could ever wish for. Almost every hour, I could dive into one of these social mediums and burn vast amounts of time “catching-up”, “socially interacting” and “learning”.

Alas, this is having a destructive impact on my work and – ironically – my social connections.

Used properly, Social Media is an immensely powerful tool for communicating and building connections – talk about stating the obvious. Over the past year, I’ve blagged a brand-new 3D television for free from Sony, a network-unlocked Nokia Lumia 920 phone from Windows Phone UK, and a free Xbox 360 replacement for my out-of-warranty unit from Xbox Support. These weren’t gained through online competitions, but instead through brief conversations via Twitter. Most of my recent technical knowledge has been gleaned from links, sources and resources I’ve gathered through Facebook, Twitter and LinkedIn. And, most importantly to me, I initially bumped into a (now very good) friend through an obscure social network.

On the flipside, I’ve burned through thousands (literally thousands) of hours over the past 12 months reading, writing, and interacting via Social Media – most of which, I can confess, has not improved my life in any meaningful way. Of course, we *all* get a small kick when we interact socially with a friend – a witty Facebook riposte, a shared cat video, or admiring a photo of someone’s dinner. Great stuff, and tremendous fun, of course. Lately, though, I have been viewing all of these interactions with an incredibly cynical eye and wondering whether my social connections have been deepened, or my knowledge broadened, by these fleeting moments of interaction… Sadly, I’ve observed that I’ve spent too much time diverging off at random tangents to consume content or interact with people that only have the loosest of relevance to my work or my social life. More insidious, though, is that I’ve noticed I’ve spread myself too thin – not communicating with the right people, at the right time, because I’ve been too busy tending to a stack of other queued “interactions” that won’t bring any real value to me, other than the small kick of satisfaction you get when communicating to another fellow human being.

Time to retrench, then. I’ve always been sensible with whom I connect to – I don’t accept just any/every Facebook friend request, nor do I just randomly follow people on Twitter. I also prune my connections regularly – a process I used to perform every half-year, but now intend to do every quarter. Even though I’ve been reasonably merciless, I still have more Facebook friends than I care for (253 versus the 150-200 I’m aiming for). I’m happier with my Twitter count – I follow 140 Tweeters – but it’s still a shade over what I would really like. We’ll see how things go over the next 3 months, prior to the next “cull”… 😉 It’s also time to set a few new ground rules for me to adhere to:

Given the rapid pace that our feeds update at in our various social networks, it’s understandable to worry that a meaningful nugget of information passes by without us noticing. Certainly, I’ve been guilty of falling victim to this – which is why I’ve been checking Facebook and Twitter at pretty much every fleetingly available moment. To combat this, I’ve decided to channel all of my notifications onto my phone. Windows Phone is great at presenting relevant information to you, at a glance, via the dynamically-updating Live Tiles on the Start screen. Further, the Me Tile provides notifications if someone has specifically tagged or mentioned me in the social networks that I’m part of. 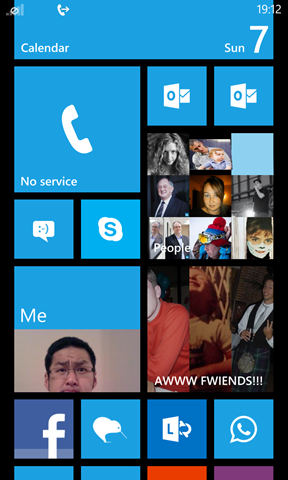 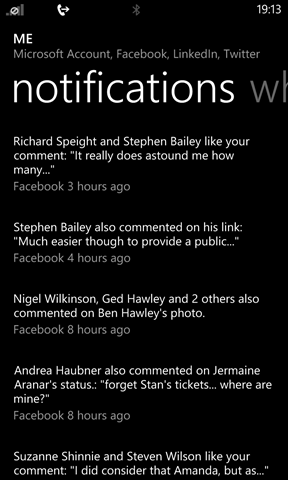 Now, at a glance, I can see if anyone has tried to get in direct contact with me regardless of medium (in one screen, I can see phone/voicemail, SMS/Messenger/FacebookChat, Skype, business and personal e-mails, Facebook, Twitter, LinkedIn, Lync, WhatsApp).

Also, I have a select handful of people whom I consider good, or very close, friends (my left hand has more digits than the number of people in this group). I’ve placed these folk in my “AWWW FWIENDS!!!” tile – my phone basically stalks these people and updates that Live Tile as soon as they post anything up to a social network, or communicate directly with me.

The Me Tile informs me if anyone has mentioned me directly – a single tap and a swipe later, and I see a summary of activities that directly relate to me in my “notifications” area.

The theory is that if anyone needs to get in touch with me, I’ll be immediately aware. (Of course, this doesn’t mean I’ll immediately respond – but at least I won’t “miss” information I think would be pertinent to me.) Let’s see if this theory pans out well… 😉

FOCUS ON USING THE RIGHT MEDIUM FOR SOCIAL UPDATES

A lot of people mash all of their social networks together, and approach status updates with a scattergun approach, “spamming” Facebook, Twitter, LinkedIn and others with the same update. I’ve decided to take a more finessed approach to status updates and, in future, will use the most suitable medium for whatever updates I post. A caveat – as my personal and professional lives are so similar and intertwined, a handful of posts will indeed hit multiple social networks. In which case, I’ll at least tailor my messages to suit each medium (@mentions and #hashtags won’t leak onto Facebook, for instance).

Facebook is my primary means for connecting to my “social” friends. Details of my social shenanigans will most likely end up here, as well as posts on items I’m passionate about. I’m determined also to never spam my friends’ News Feeds with “I found this vaguely amusing, so I’ll share it with the world”-type posts. If I’m linking to something else, it’ll be because I’m passionate about it, or I feel it highly relevant to the majority of my friends.

Facebook friends are people I’ve been in touch with recently, or those I expect to meet in the near-future. I’ve taken an interest in their personal lives, and will use Facebook to keep the social connection alive. I don’t tend to add as “friends” people I’ve only met once or bumped into fleetingly; I also tend to cull people I’ve lost touch with. It sounds harsh but, if we really were good social friends, we would not likely have lost touch in the first place. Right?

I primarily “consume” content on Twitter – that is, I tend to do a lot more reading of tweets and linked articles/videos, than I do of producing tweets. I’ll interact socially with people here only if I can’t do so via Facebook. Most of my interactions, however, are geared towards “community interests” of stuff I’m passionate about – technology, all things Microsoft, and a few other interests I have.

LinkedIn I pretty much use only to maintain business connections. I don’t use LinkedIn for any social purpose at all, and I pretty much accept any request for connection provided there’s even the vaguest hint of professional relevance. I also don’t post much on LinkedIn – I don’t create a lot of commercial content I wish to share (I’m not a serial business blogger, nor does my job involve writing technical content for my professional peers).

Other social networks I dip into and out of as needed – and some more regularly than others. I check my YouTube stream once every few days, but never generate any content for it. I regularly use Foursquare (but I’ve yet to work out why, other than for metrics tracking for my personal use). I also dabble in a few other social networks, but nothing noteworthy of late.

COMMUNICATE MORE WITH THE PEOPLE WHO MATTER

By cutting out the distractions and focussing on my favoured social networks with more specificity, I should find myself with a little more free time to really communicate with the people who matter.

The rise of social networks makes it easy to connect with an abundance of “friends” – indeed, some people make it a habit of connecting to as many people as possible for bragging rights. Personally, I struggle to keep up with the 250+ Facebook friends I have, never mind the thousands-plus that some others keep (my brother keeps 1,192 “friends”, for instance). If, by chance, I really could communicate with a thousand friends – those connections would undoubtedly be very diluted. Instead, I’m determined to spend more time focussing on the people who matter to me – whether that’s on a professional basis, on a developmental front or – most importantly – for pure, personal social benefit.

I’m still unhappy with the number of contacts I have on Facebook and Twitter, and am likely to cull more people in the near-future. This isn’t because I dislike anyone. In fact, I can’t actually think of a single person I could really describe as “disliking” – I just avoid people I find disagreeable and leave it at that. (Who has the time, patience, and – frankly – immaturity to hold ill-will or grudges against another person?) I’m consciously choosing to reduce the fleeting interactions I have, so that I can increase the meaningful ones. Sounds clichéd, but certainly something I’m going to try and put into practice.

Finally, credit where credit is due. Although I’ve been contemplating this retrench for some time, this video posted by Nokia@work (Twitter handle @NokiaAtWork) helped put things into motion. There’s nothing revelatory in it, but it’s great to watch just to get some thoughts buzzing in your head. 🙂

(Disclaimer: I’m not a Social Media expert, nor do I proclaim to be one. This post merely outlines how I personally interact via Social Media.)

Socially inept moron, who optimistically hopes to stumble upon the meaning of life via the interweb. Enjoys muttering egotistically inane and random nonsense.