Just a short post! I’ve been *very* fortunate to be invited by the UK Windows Phone team to attend the Windows Phone 8 launch event in London on 29th October!

I’ll be making the most of my opportunity to touch, stroke, rub and fondle the latest Windows Phone handsets from Nokia, HTC, Samsung and others! Exciting, exciting times!

Anyhoo – if you have any burning questions for the Windows Phone team, any of the handset manufacturers, or indeed just want an opinion on anything while I’m down there, drop a comment/question below and I’ll do my level best to get an answer for you! 😀

So, the Windows Phone 8 OS has been officially unveiled by Microsoft, and the new hardware from Nokia has also been revealed.  There will be lots of in-depth, comprehensive articles floating on the Internet (the best of which I’ll link to here), but here are the bullet-point highlights!

Slightly disappointing, as this event was a mere tease at Windows Phone 8. Microsoft have stated that a full launch event will happen in the near future. However, in addition to the already announced features, the following was showcased:

First, there is a short promo video. Watch it now!

So, the Lumia 920 is Nokia’s new flagship Windows Phone 8 device. It’ll have: 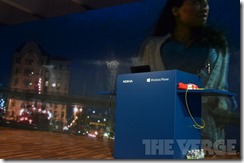 In addition to the flagship Lumia 920, the Lumia 820 was also unveiled. Sporting a slightly smaller 4.3” display, it also comes with built-in NFC, and wireless charging. No PureView or PureMotion HD+, though.

So, a few disappointments:

Already, there are a glut of articles on today’s announcements. The best are listed here:

And that’s it, really. Hopefully the bullet-points are easier to digest, and there’s a bunch of links just above for full, in-depth articles!

There’s going to be a cr@pload of information about Windows Phone 8 hitting the web, so I’m just providing the highlights of the Summit announcements in quick, chronological order. Bear in mind that these announcements were pitched at developers – new features and functionality for end-users to be announced sometime in the near future!

UPDATE 3: The Verge has published a very in-depth article on Windows Phone 8: http://vrge.co/NQh4Eb

…and that’s it for the moment! Keep your eyes peeled over the next two months for end-user feature announcements!

Socially inept moron, who optimistically hopes to stumble upon the meaning of life via the interweb. Enjoys muttering egotistically inane and random nonsense.